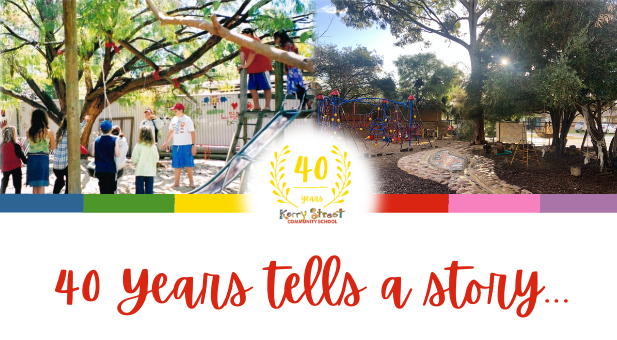 Kerry Street Community School began its life as Fremantle Alternative School (FAS), in the last term of 1980, as a response to an increasing need identified by a number of Fremantle-based families for education that would nurture and support their children. In April of 1981, the school, located on Canning Highway in Fremantle, was officially incorporated, and its founding families and first Coordinator, Ian Robertson, worked together to outline the school’s charter.

FAS initially operated as a collective and charged no fees. Attending families that could afford to support the school did so. The school did not follow any specific educational model; rather, it incorporated themes from both Montessori and Steiner (of Waldorf education).

After one year of residing in an Anglican Church on Canning Highway, FAS moved to a Seventh Day Adventist Church building in Solomon Street in Palmyra. Then later in 1989, FAS had to relocate again, this time to its longest standing, and current location on the corner of Kerry Street and Forrest Road, Hamilton Hill.

“We also talked about moving. And then of course, can you really be called Kerry Street Community School if you aren’t based on Kerry Street?”

Helen Sugars Duff – Former President of the School Board

In 2006, a group of families (“the Syndicate”) pooled finances to purchase the property. Initially the house was tenanted, and the backyard was rented to the school to provide more space to play. The school then purchased the property from the syndicate in March of 2014.

Following this purchase, in 2016, the planning commenced for renovations and building to the property with the successful application of a Capital Grant sourced by the Principal at the time, Karen Kennedy, and former President of the School Board, Helen Sugars Duff.  Retaining the existing features of the original building to keep the homely sense of the school, and considering the position of the large gum tree in the backyard were two significant factors to consider in the planning.  In 2017, the renovations and building commenced, and in mid-2018 we officially opened what is now our Administration, and Year 3/4 and 5/6 classrooms.

With everyone settled into their new environments, a whole-school landscaping project began with landscaping work undertaken outside of the new classrooms, and the project incorporated many ideas gathered over the preceding years from not just the adult Kerry Street community, but from students as well. The school also successfully secured a 5-year lease from Main Roads to use the plots of land adjacent to the school (which we now refer to as our “Wilderness Area”) for additional parking, gardening, sports and nature play purposes. In 2020, this space was fenced and opened for use during break times as well.

Kerry street continues to be a child-centred community dedicated to caring for its children, its environment and the wider world around it.

Our school obviously has its stated values, which we certainly live, but what I don’t think we acknowledge anywhere near enough, is the underlying personal attributes of the various people who make up our community. We have grit and we are resilient and creative and passionate about the education of every child who enrols at our school.

More information about our small school is available in our book: Swings and Roundabouts: A History of Kerry Street Community School 1981 to 2018. You can download a PDF version of this below.